Development of a COVID-19 Vaccine 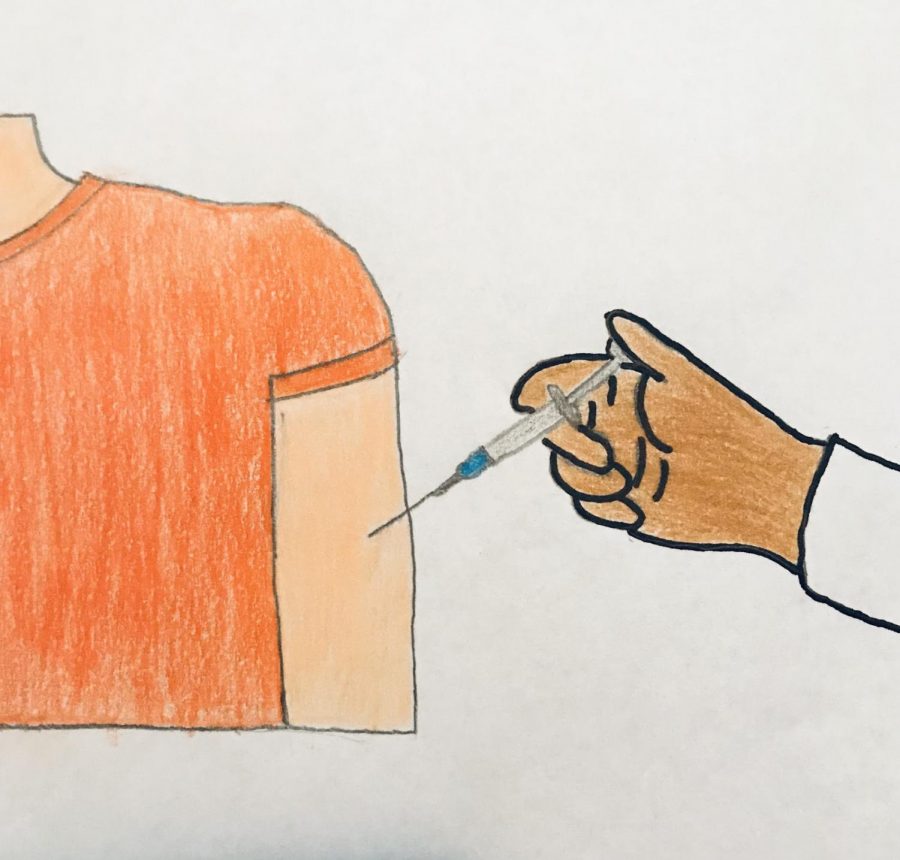 “We try to educate people on what's the risk or benefit of taking the vaccine," said Dr. Marcus Zervos. "Hopefully people will do it.”

By Joleigh Jackson and Sophia Dragich

Over the past year, scientists and doctors have conducted research to create a COVID-19 vaccine. With a huge number of companies working on it, the vaccine has been produced much quicker than previous vaccines. Pfizer, one company working on the vaccine, began its distribution on Dec. 12. The vaccine for another company, Moderna, was approved about a week later.

While news of possible vaccines has excited many people, others are concerned about its effects. Sophomore Maren Anderson is one of the people who sees potential concerns with the vaccine. She personally feels hopeful that the vaccine will work and provide positive effects, but she also is worried that people will refuse to get it.

“My only concern is that it’ll become mandatory,” Anderson said. “I think that will cause a lot of problems, because people would revolt and choose to not take the vaccine.”

Anderson’s concerns are based around the increasing anti-vaccine movement throughout the nation, which has made many Americans question its safety and effectiveness. A large number of anti-vaxxers have already decided to not receive the vaccine, or at least have pledged to wait until it is more widely distributed before they make a decision.

In response to this anti-vax movement, Dr. Marcus Zervos, Division Head of Infectious Disease at Henry Ford Hospital, who has worked on both the Moderna and Johnson & Johnson vaccine trials, wants to answer all the questions one may have about the vaccine because it’s his goal is to educate people on both the risks and benefits of taking it. He explained that although there are a few possible side effects to the vaccine, the effects of actually getting COVID-19 are much more dangerous.

“We try to tell patients that it’s much worse to get COVID-19, where somebody can get an infection and possibly end up in the hospital or even die from it,” Zervos said. “With the vaccine, the side effects can be just a sore arm and a little bit of flu-like symptoms.”

The possible side effects of the vaccine also interest biology teacher, Susan Speirs, who wonders about the biological makeup of the vaccine. Speirs seeks to find the answers to her scientific questions and also urges her students to engage in research about the vaccine.

“While I am not an expert in epidemiology or infectious disease, the curiosity I do have in and about the biology of things wells up many wonderings,” Speirs said. “I wonder, how does the mRNA enter the muscle cells of the shoulder where the vaccine is injected? Are there side-effects from this action?”

In regards to Speirs’ questions, Zervos explained that there are two main ways the vaccine is being created. The Moderna and Pfizer COVID-19 vaccines, for instance, are different from others, such as the chicken pox or measles vaccine. They use a relatively newer mRNA technology in which an outer piece of the virus is sent into the body. The cells react to this small piece and then create antibodies, which allow them to form an immune response to the COVID-19 virus.

For two other companies, Johnson & Johnson and AstraZeneca, a more conventional approach is being taken. This method involves placing the COVID-19 virus onto an attenuated virus, meaning a virus that is not harmful to the body. The attenuated virus then can enter the body and cause the formation of antibodies, resulting in an immune response.

Zervos says that having multiple companies develop different approaches to the vaccine and having access to a substantial amount of resources allows for the vaccine to be created very quickly.

“The speed of this one was mainly because there were a lot of resources put in to identify the virus and multiple hospitals involved so that we could do the enrollment quickly,” Zervos said. “That’s something that is different from other studies.”

With the many vaccines making their way to be approved by the FDA, the next step is administering the vaccine. Zervos says that groups who are more at risk for getting COVID-19 will receive it first, but he expects the general public to have access to the vaccine in the next several months.

“We expect the timing to be: Healthcare workers first, followed by nursing home patients, elderly people, those with chronic diseases, first responders, and then others later,” Zervos said.

Zervos and the rest of the medical community are striving to immunize as many people as possible. Their ultimate goal is for 70 to 80 percent of the population to become immunized, as that would result in herd-immunity and cut further spread of the virus. This would allow infection rates to reach a low enough number that businesses would be allowed to reopen.