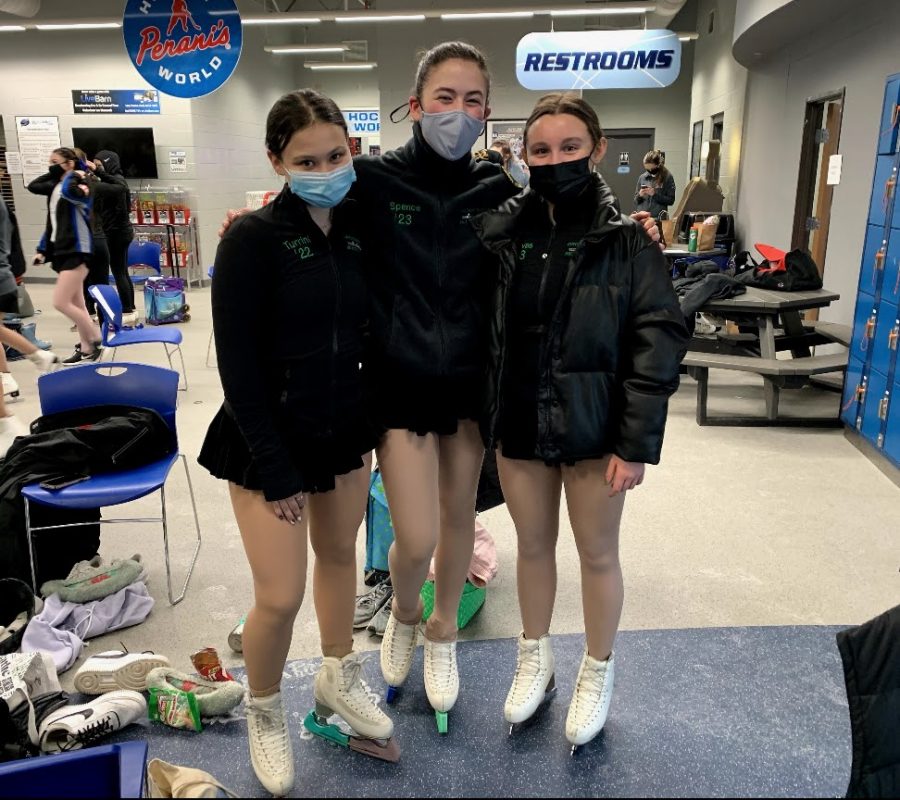 Sophomore Paige Spence said that reaching the state-level competition was a major accomplishment for the team because they only had one opportunity to earn the scores that they needed. “In the past few months we have had to cancel two out of our three competitions, so we had one left and whether we made it to states or not was dependent on how we placed in our only competition,” Spence said.

Despite experiencing a season of uncertainty and cancellation due to COVID-19, two of the three Grosse Pointe figure skating teams are able to perform at a state-qualifying level. The teams will be taking part in the state competition on March 28. Head coach Claire LaDue said they have many experienced skaters that will give them an advantage over the competition.

“We have some skaters that have been skating competitively by themselves for many, many years and I think that is why our teams were strong this season,” LaDue said.

While LaDue believes their skilled skaters are the team’s greatest asset, sophomore Paige Spence believes the team’s passion and commitment has allowed them to be successful in past competition and will be shown in their performance at states.

“I think our team made it to states because of the team spirit and work ethic,” Spence said. “We were in the mindset that we could do it if we really focused and did our best in each individual category.”

COVID-19 has had various impacts on the season. Many figure skaters usually practice and skate year-round, but as skating rinks were closed during summer months, per the governor, this practice was prohibited. Additionally, rinks were closed again in November, at the beginning of the winter sports season, and were not opened until early February, taking away several months of the season.

Although it was difficult for skaters to find time and ways to practice, the team overcame those challenges in many ways. LaDue said that individual practice has been a much bigger part of the season than in previous years in order to limit contact.

“Our team only practices together once a month,” LaDue said.  “Skaters are expected to skate by themselves and keep up on their skills.”

Due to the limited practice time, the skaters value the time that they do have on the ice. Skaters will compete both individually and in team events. Some will compete with a freestyle program, focused on endurance, as well as being entered in the group’s team events, focused more on jumps, spins and field moves. Sophomore Ally Bierkle acknowledged the hard work that the team has put in the past few months, and their continuous hard work in preparation for the state competition. She said the team has worked diligently to receive the best scores possible and persevere with that work to further increase their skill level.

“We have all been practicing multiple times a week so that we are prepared to hopefully get a good place at states,” Bierkle said.

With the competition quickly approaching, the team is putting in their final efforts at perfecting their routines and skills. Both the B and C teams will be competing in the event. The B team has had a successful season, winning each event at the district level. The C team, which has made it to states many times in the past, usually ranks around seventh or eighth in the state competition, and the members are hoping for a higher placing performance this year. Spence is confident in her team’s abilities and foresees success at the competition.

“I’m so hopeful we will do well at states,” Spence said. “I think if we put our minds to it we’ll be able to place well.”