There’s no place like home: A step inside “Harry’s House” 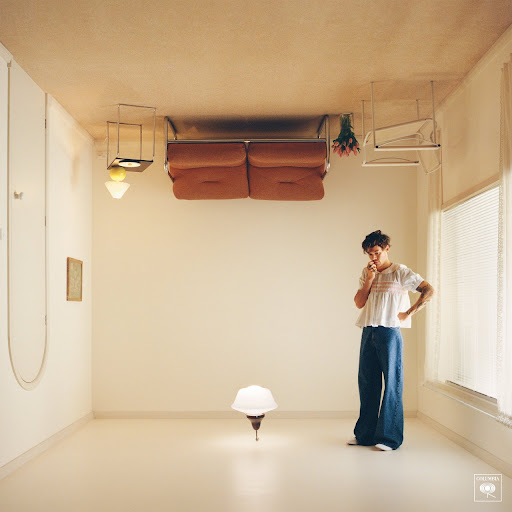 Global popstar, chart-topping artist and boy-band heartthrob Harry Styles has done it again with his third studio album, “Harry’s House.” The 13 tracks exhibit a confident and bold jump from his first album, which primarily consisted of 10 timid and acoustic melodies. Those songs set the example for Styles’ solo-career signature sound, a clear breakaway from the pop-rock hits his former band, One Direction, produced. But, the release of his second album, “Fine Line” was much different. In these 12 songs Styles changed his style drastically, featuring the perfect mix of upbeat pop hits, but still with the slower songs reminiscent of his first album. I was unsure if Styles could ever live up to the perfection of his second album, until May 20, when I stepped into “Harry’s House,” a melting pot of irresistibly vivacious beats, smooth melodies and 13 groovy and vibrant songs.

The album is overflowing with creative beats that begs its listeners to get up and dance. The album’s opener, “Music For a Sushi Restaurant,” is one of the most upbeat and lively songs out of the 13 tracks. With a chorus of bright trumpets, it makes it impossible to not groove with the music. Paired with the rather unusual, yet fun lyrics, this song is full of energy and passion from Styles. “Satellite” is another upbeat hit that starts out slow, but the chorus immediately kicks in with an energetic drum beat that continues on until the end of the song. As the song reaches its climax, the music builds chaotically and Styles’ voice is layered to sound like it is spinning around your head, just as a satellite would.

This album is filled with affectionate love songs as well. In “Keep Driving,” a sweet tribute to a person Styles loves, he announces his “small concern with how the engine sounds.” But, he chooses to ignore it and “just keep driving” with this person. In the bridge, he lists more pressing issues, but reassures us that “it’s all good,” and asks his passenger, “Hey you, should we just keep driving?” These wholesome lyrics paired with the mellow beat and background music, produces the perfect sweet, warm and creative love song. “Daylight” features the lyrics “If I was a blue bird/I’d fly to you/You’d be the spoon/Dip you in honey so I could be stickin’ to you,” another creative way Styles displays his affection for the subject of this song, and true to the warm environment that “Harry’s House” creates.

Despite the new eclectic sound Styles experimented with in his newest album, a few songs serve as interludes to the excitement. A slower and more emotional track, “Matilda,” is a touching story of a girl in a broken family. “Boyfriends” is another slow ballad that displays Styles’ smooth and melodic voice. This album closes with a bang,  with “Love Of My Life,” a track about a relationship that isn’t the same anymore, a shift from the pop style love songs featured earlier in the album. The music from the album trailer is the background music of this song, resulting in a familiar excitement for a fan’s first listen. A medium tempo also allows for Styles’ vocal range to be put on display similar to the slower ballads, but the song still incorporates a strong beat like earlier songs.

Although with a much different style and sound from his solo-career beginnings in 2017,  Harry Styles still managed to make a remarkable third album. The album feels dreamy, light and perfect to play in the car with the windows down on a summer day. The constant references to nature, food and home, create a personal and casual space that Styles can be himself in. My only trouble with the album is the initial expectations I had set up when the album name was released. With the name being “Harry’s House,” it seemed that this would be Styles’ most personal album yet, strictly about himself and his life. Even the hit single “As It Was” led to this notion, an upbeat song with rather somber lyrics about nostalgia and how things used to be. But, unexpectedly, the album was more about his lovers and objects of affection, rather than his own character. Despite this not really feeling like Harry’s house, the album is still a 5-star worthy record, and Styles most definitely will not be stopping with the hits anytime soon.