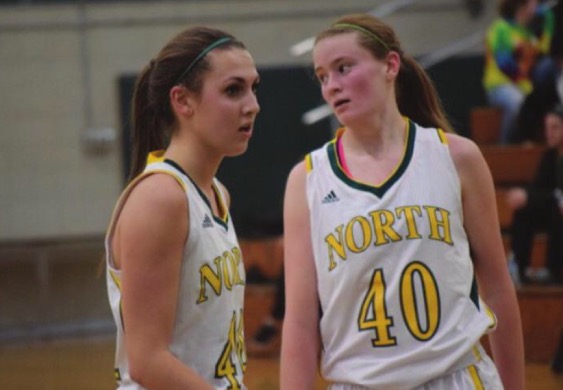 Sophomore Julia Ayrault, 40, talks with alumna Erin Armbruster after a play last year. Ayrault broke the 40-year-old record for most points scored in an individual game on Feb. 4.

With just a few seconds left till the buzzer blares, the clock is ticking. Sophomore Julia Ayrault wipes the sweat off her forehead, receives an incoming pass from her teammate and spins the orange basketball in her hands, taking a moment to collect herself. Ayrault lifts her arms, shoots and scores.

In 1977, Ann Starinski, former health and physical education teacher, set the school record for the most points scored by an individual in a game of basketball: 31. Forty years later, that record has now been shattered, by Ayrault, in her recent game against Utica High School on Feb. 4. Scoring 35 points, she set the final score to 51-40.

Ayrault, a captain of the varsity girls basketball team, has been working hard to improve her skills. “Yes, she’s naturally talented, but on top of that, she’s spent a lot of time working on her game, not just with the high school team, but they have travel teams that she participates on,” girls basketball coach Gary Bennett said. “So when somebody sees her play, it’s part natural ability, but a big part of it is that she’s put in a lot of time working as a basketball player.”

Sophomore Meghan Gallagher also plays on the varsity girls basketball team. During the game, Gallagher thought Ayrault was outstanding. “Julia worked really hard to reach this goal of hers and I’m happy it payed off for her,” Gallagher said via email. “I was very happy for Julia, she played really well.”

“(I) Broke the record by four points. No, (I) didn’t really know there was a record until after the game,” Ayrault said. “I felt pretty good when I found out—it was a surprise, so I felt excited. More importantly, I was glad that we won that game.”

However, it’s not just Ayrault who has made an improvement. The rest of the team has been stepping up their game as well.

“They’re all working hard, I would say every single person that we have on the team is a better basketball player then they were when we started in November,” Bennett said. “That’s the rewarding thing about coaching, you can see the improvement.”

The varsity team trains six days a week, and to Bennett, their hard work has certainly paid off.

“When these girls try out for basketball they’re making that commitment to work really hard. You keep working no matter if you’re dead tired, or your lungs are hurting, or your legs are hurting–it doesn’t matter. You’re just going to keep working through it,” Bennett said. “It’s really tough on our girls, really a challenge, but you know what? We’ve actually exceeded my expectations. When we started the season, I thought we would have trouble even winning a game in a Red Division and we’ve already won four games.”

To Ayrault, winning the game would have been impossible if it weren’t for the support of her coach and teammates.

“(Bennett) is (an) extremely supportive coach. He develops strong, personal relationships with all of the players. My team is extremely supportive and everyone has to play a role which they fulfill perfectly,” she said. “We couldn’t be successful if everyone wasn’t playing their role. Our team is really a family and we have a close bond I wouldn’t trade for anything.”