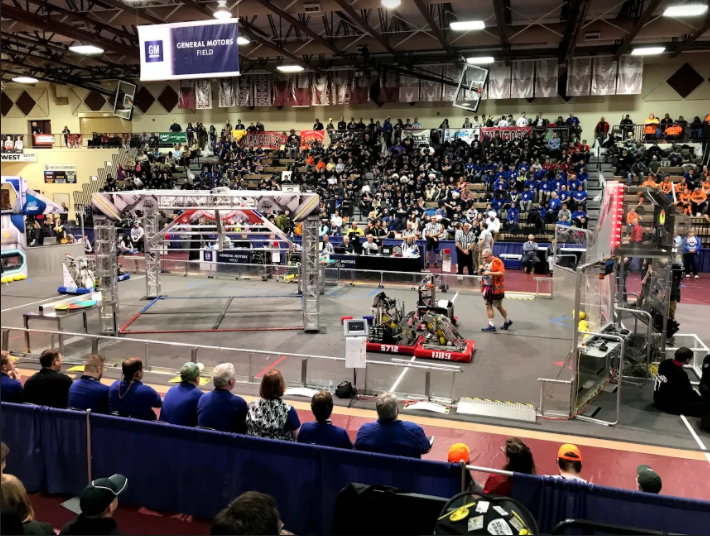 “Our competition season last year was very brief, we attended one competition at Milford High School, and I remember at the end the top teams would usually go up and shake hands with the judges, but we were only allowed to bump elbows,” Barber said.

By Annabelle Julien and Drew Lovell

Sophomore and part fabricator Tegan Barber joined the robotics team her freshman year to expand her knowledge about a subject she is passionate about. However, this year’s Gearheads competitions look a little different than years past.

Although there will be no in-person competitions this year, Barber is excited that they are still participating in a three-part replacement competition with online submissions.

“The first one is creating a product and pitching it to (For Inspiration and Recognition of Science and Technology),” Barber said. “The second is operating last year’s robot to complete specific tasks, and the final one is designing a game for a robotics competition.”

Senior and co-team captain of Gearheads Steven Spangler has led his team through an unconventional competition season.

“At the beginning of our season we weren’t in our shop at all so we were only able to work on the virtual components of the competition,” Spangler said. “For about a month and a half now, we’ve been able to be back in our shop building our robot.”

Gearheads Robotics Coach Jason Wolfsen has been watching over the team, and has seen the changes that have needed to take place in the workshop involving team roles.

“In a normal season we have a team captain(s) and then captains for the different areas of the team,” Wolfsen said. “This season, however, we have those in place but are relying on our team captains and upperclassmen to help us with the different projects.”

In a competitive environment as well, Wolfsen has witnessed various changes compared to previous years. In previous years, the Gearheads were teamed with two teams to form an alliance and compete against three other teams in the game.

According to Wolfsen, the students feel great pride in their work. He feels the same for the work done by the students.

“From what I have witnessed and observed in our meetings they seem quite confident in their entries this year,” Wolfsen said. “They are well-planned and thought out and I have let them know how proud of all of the hard work they have put in this year.”