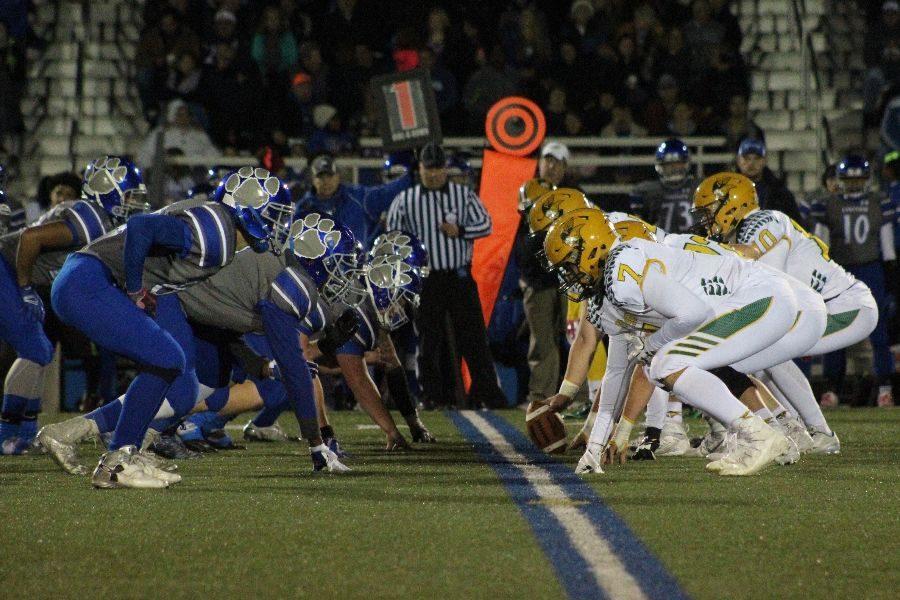 The offense lines up for a first-down play at the line of scrimmage.

An offensive barrage and outstanding defensive plays propelled the Norsemen to a 49-7 win. Lakeview scored early in the first quarter to take a 0-7 lead, but that was all they would get.

Once again, the tandem of senior running back Jared Jordan and junior quarterback Bjorn Bjornsson led the Norsemen on offense. Jordan, who had 190 rushing yards on 12 carries with three touchdowns, continued his domination on the ground from the regular season. Bjornsson had an equally impressive performance going six-for-eight with 164 passing yards and three touchdowns.

Senior Zion Golden, who plays right tackle, was happy with his team’s performance. He believes the team played well despite a few hiccups early on.

“I think the score speaks for itself. We walked in, blocked and tackled,” he said. “We let them score one in the first half but it was cool because we had a few bumps and roadblocks but mostly we did our job.”

Other standouts for the offense were senior Dillon Webb with four catches for 104 yards and two touchdowns and junior Pete Ciaravino with two catches including a 27-yard touchdown catch.
On the defensive side, the team was led by junior Sheldon Cage and senior Dillon Webb with 13 and 11 tackles, respectively. Junior Pete Ciaravino also contributed defensively with a fumble recovery that he returned 27 yards for a touchdown.

The official recap is available here.