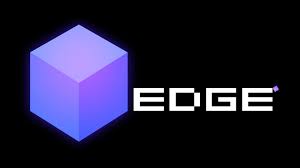 Hanging off of the edge of a block to deduct time, or being shoved off the edge of a level are two defining characteristics of ‘EDGE’. Despite the puzzle games’ simple graphics, the content grows in its complexity overtime, as to keep the player intrigued for later, unlockable levels.

With over forty levels available for the player to be tested on, ‘EDGE’ has a simple objective of reaching a designated destination. The zone is marked by a rainbow border, which must be reached by rolling the cube along. There’s often multiple paths to reach the goal, yet some are faster or closer to an edge than others.

The levels are designed in great diversity, between the entrance of the block to the player’s control, to the multitude of moving obstacles in the way. The block may drop down into the level, or surface into it like a submarine.

There are multiple risks in each level, including slabs that fall when stepped on, or blocks that sweep across a path, in order to force patience from the player, before crossing. These hazards excellently emphasize the risk the player faces when near an edge. Some of the shifting blocks push the player into tunnels, others down into a pit to have to restart at a checkpoint.

In certain levels, there are also pulsating rainbow rings on top of certain locations in order to minimize the player-controlled block. Through this, a new dimension is added to the game, as there is the ability to climb up walls or enter one block wide tunnels. The change isn’t a complex adjustment to handle, and is beneficial to the pace of the levels it is used in, as it allows the player to approach situations via a new perspective.

Although there is an emphasis on the level edges, time plays an integral part in the game’s objective. With leaderboards and records per level, and a grading scale based upon player speed, self-improvement is key for personal and external pressures. While a simple aid, many of the blocks are in different monochromatic shades, extremely beneficial for the player to plan fast level runs, as the shades create a grid to plan off of.

On computers, the control of the block is based on a typical four key movement system. While hanging off of an edge deducts time from the player’s total, the effective skill requires the player to tap the directional button to gain time, causing self-regulation, as to not accidentally fall due to a mistake.

With only minute, relatively unnoticeable flaws, the low price of the game is quite worthwhile for its fantastic qualities and tricks to keep player experiences refreshing on a level-by-level basis. ‘EDGE’ is available through the Steam store, Google Play Store, and other platforms and prices range from three to seven dollars depending on the platform.