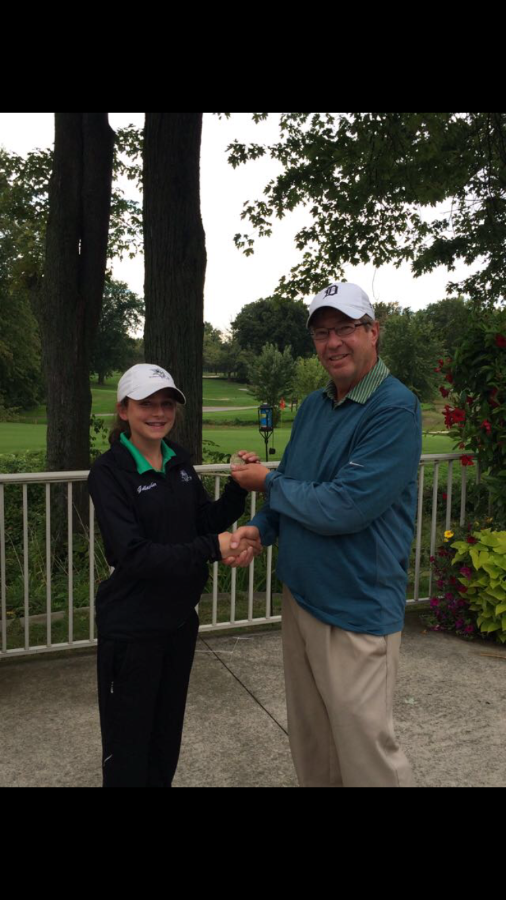 At age 25, Pete Kingsley became an official professional golfer. Now, 26 years later, he is back on the green as the girls golf coach.

This is the first season Kingsley has coached girls golf, however he has been coaching the boys team for two years. Previously, he coached girls golf at South for seven years and also at various colleges. During his time at South, the team won the Division I state championship.

His main goal with the girls team is to work on their mechanics and develop their technique, while still maintaining a relaxing learning environment.

“Our goals are to get better every week,” Kingsley said. “We need to go into tournaments and play each shot

the best that you are capable of. Shot by shot. We don’t put too much pressure on the players.”

At press time, the team is 0-5 in the MAC Red division, which is the highest division. But despite their record, Kingsley is impressed with the team’s improvement over the short time he’s worked with them.

“We’ve improved immensely, so much that the other coaches can’t believe it,” he said.

Growing up, Kingsley was a three-sport athlete. He went on to play golf in college and then became a PGA professional in 1987.

Junior Sam Karwowicz hopes that Kingsley will help her gain consistency with her swings. Karwowicz, along with many of her teammates, has taken private lessons with Kingsley before he became her coach.

“Most of us knew him before (he became North’s coach) so we’re comfortable around him,” she said. “He’s not a coach that we just hired for no reason. He’s a PGA professional so he knows what he’s doing and he can help all of us.”