Madison Beer writes her name in cement on new album 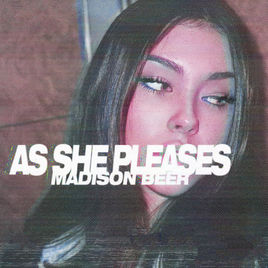 Attempting to shy away from her reputation as “Justin Bieber’s protege,” and make a name of her own, Madison Beer released her debut album “As She Pleases” on Feb. 2. The album was preceded by singles “Dead” and “Say It To My Face,” and featured five new songs.

“As She Pleases” is much different than her earlier singles “Melodies,” “Unbreakable” and “Something Sweet,” which can be described as nothing other than bubblegum pop. But, it showcases both Beer’s darker side and her ability to switch up her style, bringing out her musical range.

“Dead”— the leading single on the album — was the first single Beer had released since 2015’s “Something Sweet,” and was well worth the long wait. As the song details the relationship with a past lover, it delivers listeners with a infectious, head-bopping melody, making it the perfect start to the album.

The ballad is then followed by “Fools,” a light and funky track that balances “Dead’s” darker vibe. Again ridiculing a past lover, Beer sings to the past flame and explains that only a fool would stick around after the love leaves a relationship. The almost 70s-era funk vibe given off by the song goes well with the old-fashioned sound on “Teenager in Love,” which Beer herself explained was inspired by her love for 50s music. The older influences in her music help Beer express that she’s not just a bubblegum pop princess, and widen her musical catalog.

“Tyler Durden” — my personal favorite track on the album — is without a doubt the most unique song. The simple, plucked-guitar instrumentals blend perfectly with Beer’s voice, which appears softer than in some of the album’s earlier songs. The song alludes to the 1999 cult-classic “Fight Club” in more ways than the title, with multiple lyrics relating back to scenes from the movie.

The first two lines of the song especially — “With my fingers in your mouth/You’re only speaking vowels” —  mirror the first scene of the movie, where Tyler Durden (played by Brad Pitt) is seen holding a gun inside the Narrator’s (Edward Norton’s) mouth. With a voice-over from the Narrator,  he explains that when a gun barrel is in your mouth, you can only speak in vowels.

The entire album seems to relate back to the theme of love — whether it’s an ode to a past relationship or a newer one. It would’ve been nice to see a song that was about something other than romance, but despite that, each song was incredibly well done. With both a European and U.S. tour coming up, it’s unlikely Madison Beer will be solely known as Justin Bieber’s protege for much longer.