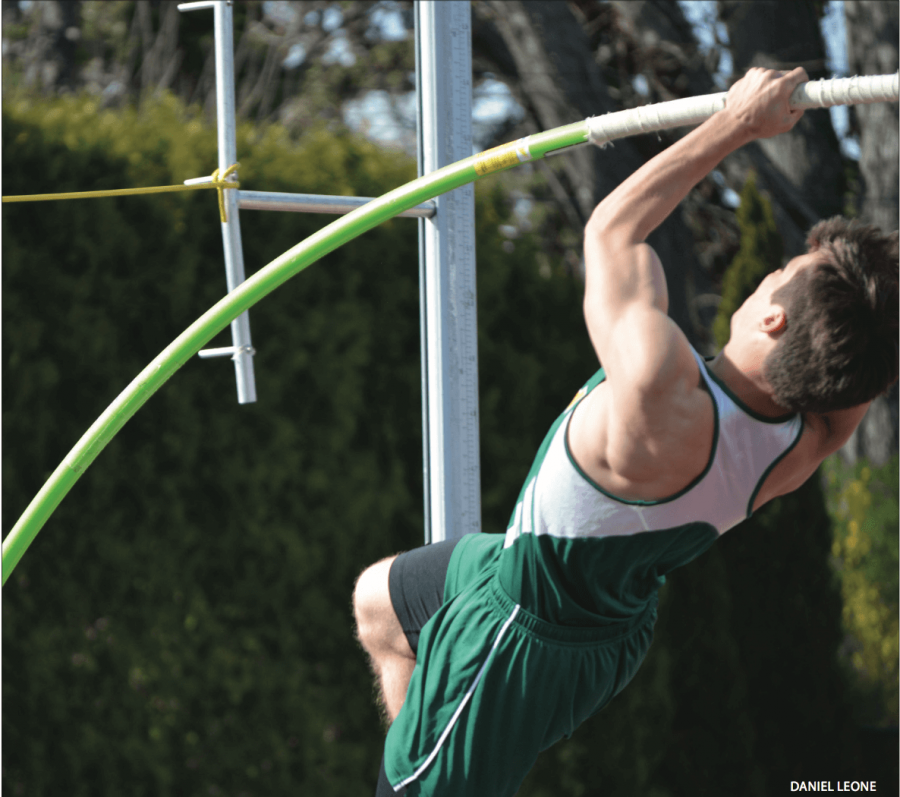 However, it wasn’t easy for Leone to achieve his goals in pole vaulting because of his stature.

“I knew I wasn’t going to grow any taller because I’m kind of short,” he said. “It made me realize the only thing that I could do is get stronger.”

Leone’s aspirations to become stronger finally became a reality when he and junior Carter Waldrop began working out together freshman year. They posted two videos about their journey on their YouTube channel, Power of Muscle.

“It was tough. It took a lot of hard work,” Leone said. “It was always good to see yourself achieve things you went for, like new goals and stuff, and watch yourself be stronger along the way.”

Pole vaulting is in Leone’s blood. His brother Matthew Leone (a 2013 alumnus), father Nicolo Leone, uncle and grandfather all did pole vaulting in high school.

Daniel first discovered the sport after watching numerous videos on YouTube. He started pole vaulting in the spring track and field season of 2014.

He is currently on the boys track and field team and the Inversion Vault Club. He frequently places first at meets and invitationals. In addition to pole vaulting, Daniel enjoys calisthenics, parkour and gymnastics, which he says plays a part in his pole vaulting success.

“I thought I’d be pretty good at it with my strength, and then the technique for pole vaulting relates to gymnastics bar movements,” Daniel said. “People always told me I’d be good at it, so I just gave it a try.”

Nicolo thinks Daniel’s growth in pole vaulting symbiotically brings work ethic and passion and that these values will help Daniel achieve his goals in the future.

“Pole vaulting has helped give some structure to his life because he can refer to his goals and then do what it takes to make them happen,” Nicolo said via email. “All the training, time, travel and commitment to this sport has shown him what hard work and dedication can produce—a champion on and off the track.”

His brother finds that Daniel’s active lifestyle brings many benefits, like new friends and scholarship opportunities

“I think (sports) have affected him very positively and given him an outlet for a lot of different things. They have given him an outlet to just basically be creative and outgoing, and he’s found friends through it, and it’s just something that he loves to do,” Matthew said. “It’s something that he can call his own because not a lot of people do it, and I think it has affected him extremely well physically.”

After Daniel gained a passion for the sport, his family realized his talent. Both his father and brother expect him to have a lot of success in pole vaulting because of his dedication to it.

Daniel hopes to improve his skills and receive scholarships for pole vaulting in the future. Daniel aspires to pursue pole vaulting after college because he wants to stay active and fit.

“(Pole vaulting has) made me realize that there’s no limits to my potential,” he said. “When I fail it makes me more motivated to get back up and try again and work harder next time.”