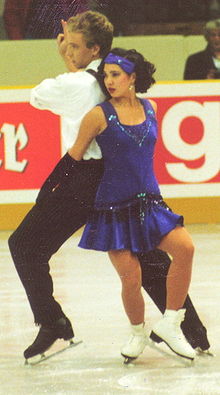 Goolsbee (Scheneble) and Schamberger at the 1992 German Championships in Berlin.

Member of the German Winter Olympic Team and North graduate Jennifer (Goolsbee) Schneble details her life before, during and after the Olympics and how it has helped her so far in her extraordinary life.

Schneble sat in a salon chair at 8 years old, discussing her dream of going to the Winter Olympics.

The thought of competing at the games was in the back of her head since she started skating at 5 years old. She worked extremely hard throughout her school years at Mason, Parcells and North. Schneble went as far as doing her homework on the ice.

“I was lucky to get the grades that I got. If I was an awful student, there was no one way my parents would’ve let me (skate),” Schneble said. “I have loved dance my whole life. You’re able to tell a story with your body and expression.”

Schneble met her dance partner, Hendryk Schamberger, at a German Skating camp, and thus began their journey to the Olympics.

She moved to Germany with Schamberger, spending the next 14 years of her life there.

When she hit the runway, she realized that she didn’t know a lick of German.   Schneble only had a pocket German dictionary and had a peculiar way of learning the language.

Eventually overcoming her struggles with German, Schneble and Schamberger took ninth place at the Olympics.

Along with that, they became five-time-winners of the National German Championships, and won some international titles together.

Schneble retired at 36 and had two children, Jordyn and Rush.

Currently, she is an executive for Tom Ford Cosmetics, earning her place in the company because of her experience with makeup as an ice dancer.

“I loved makeup, and I would take it with me to competitions, so my competitors would start asking me to do their makeup,” Schneble said. “I was doing almost all of my competitors’ makeup when I was in international competitions.”

When she was sitting in that salon chair talking to the stylist, the Olympics were just a distant dream. In the next two decades, that dream turned into a real memory.

“He giggled (when I told him),” Schneble said. “Then when I went to the Olympics, he sent me this humongous box of stuff because it’s one of the things you say as a kid.  You have that dream. It’s one of the biggest dreams you can have as an athlete to be able to compete in the Olympics.”