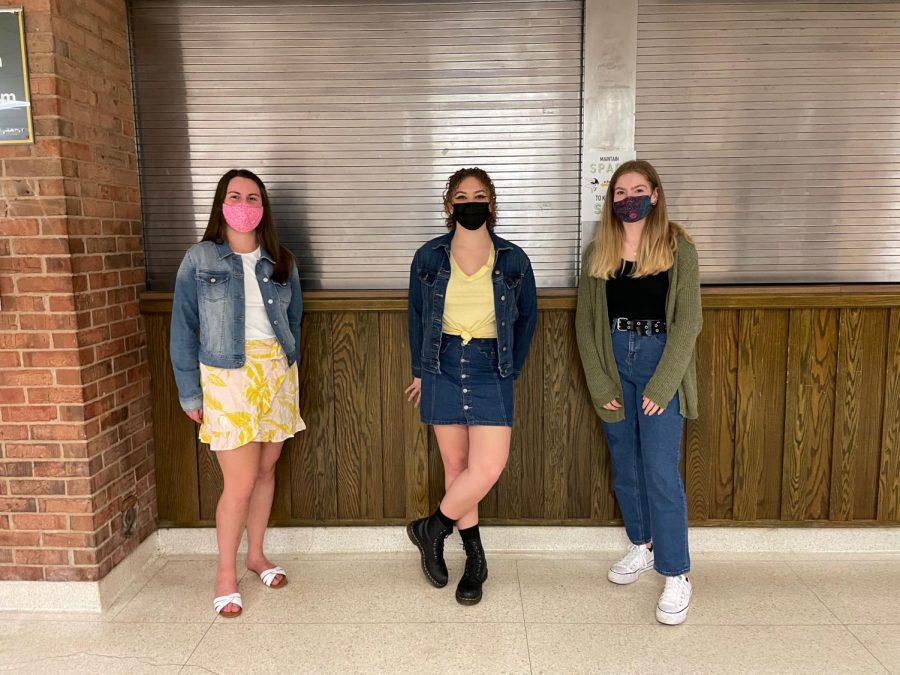 Senior Emily McCloskey, sophomore Isabella Yoakam and senior Eliza Ellery don different denim clothes to participate in Denim Day. Ellery said that the purpose of wearing denim was to spread awareness of important issues in the community. "The purpose of denim day was to spread awareness of and take a stand against sexual assault harassment," Ellery said.

By Michael Hartt and Drew Lovell

The event consisted of students wearing any amount of denim that they felt comfortable and telling others about their reason for wearing denim.

Ellery said that she participated in the day to help raise awareness of some of the issues surrounding these statistics.

“I participated in denim day because I think it’s important to spread awareness about issues that are prevalent in our society,” Ellery said.

Sophomore Gaelle Dalmacy was part of the team on Diversity Club that planned Denim Day. She said it originated after an unjust result of an Italian court case.

“Denim day was (originally) created to stand in solidarity with victims and raise awareness about sexual assault/harrasment after a court in Italy dismissed a rape case,” Dalmacy said. “The court stated that the victim couldn’t have been raped because she was wearing denim shorts and was asking for it. It came (t0) North after a member of the Diversity club suggested (we implement it here).”

Math teacher Julie Pappas was one of the many teachers that participated in Denim Day. She said that although she thinks the day was overshadowed by the teacher sick-out, she saw a lot of people wearing denim and thinks that awareness of the issues behind it were talked about.

“I saw a lot more teachers than usual wearing denim,” Pappas said. “I also heard students talking about it while they were still here.”