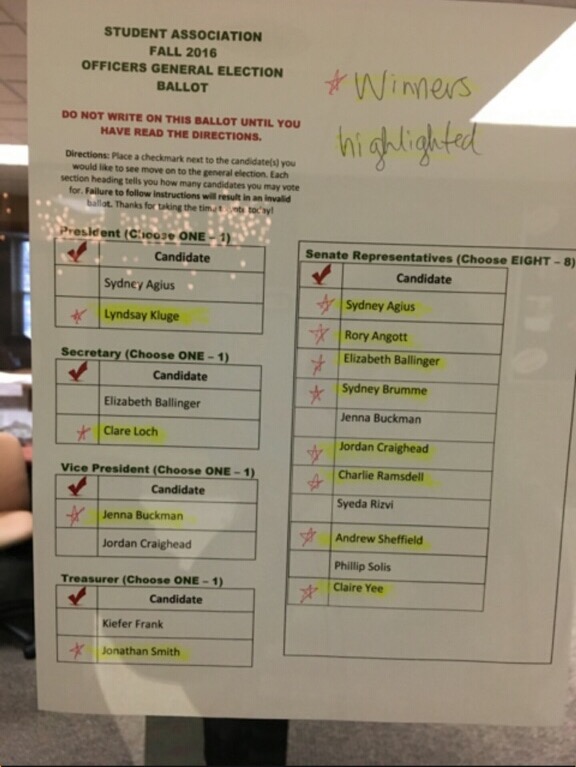 The winners names were posted in the office after the voting concluded on Oct. 28.

By Sonny Mulpuri and Sofia Ketels

Freshmen lined up at the bookstore on Friday, Oct. 28 to vote for their class representatives. Results were announced that afternoon.

Freshman Jenna Buckman won the vice presidential election. She’s had student council experience since sixth grade and she has a passion for helping her peers, she said.

“(I want to make my class better) by making everyone happy, helping people when they need it, and taking in for account everyone’s ideas,” Buckman said.

The Class of 2020 is supervised by co-advisers Ambareen Ameen, who teaches social studies, and Alyssa Sandoval, who teaches English.

Sandoval believes that students run for student council because of the ability to interact with classmates they might not get the opportunity to talk to on a regular basis.

“I think that it’s just really a good opportunity to get into a position where you help your school and interact with people that you’re going to most likely be attending school with for the next four years,” Sandoval said. “It’s a nice social atmosphere. I think the students are very like-minded in the sense that they want to help Grosse Pointe North become the best it can be.”

The class had a primary election to narrow down the presidential candidates to two: freshmen Sydney Agius and Lyndsay Kluge.

“Being freshman it’s usually harder to get the word out but they seemed really eager,” Ameen said. “We had a good turnout.”

Each candidate is able to campaign with posters and certain objects that are acceptable under the revised policy that took effect last spring. The rules prompted Buckman to pass out pencils.

When the idea of using promotional geofilters was brought up, there were questions as to if they would be acceptable under the policy, which limits what candidates can use in their campaigns. Geofilters, which can cost money, however, are acceptable, Sandoval said.

“We decided this year that we can do geofilters for Snapchat because that was something we haven’t had to deal with before, Sandoval said. “Because students were interested we decided that that’s OK. It’s like 10-20 dollars for a geofilter.”

The council will follow the suit of the other classes and Student Association and have weekly meetings. At these meetings they will discuss topics like fundraising for their class and social events so they can get more comfortable with each other.

Buckman is looking forward to stepping into her new vice president role and impacting her class. She hopes to use her position to help combat bullying.

“A big priority I want to address is just people being bullied in general and those that don’t fit in with today’s standards and helping them feel like they’re not alone,” she said. “I’m looking forward to being able to help out other people and getting leadership roles because I like being a leader and helping make a difference.”