Board votes to loosen quarantine restrictions, teachers express their discontent 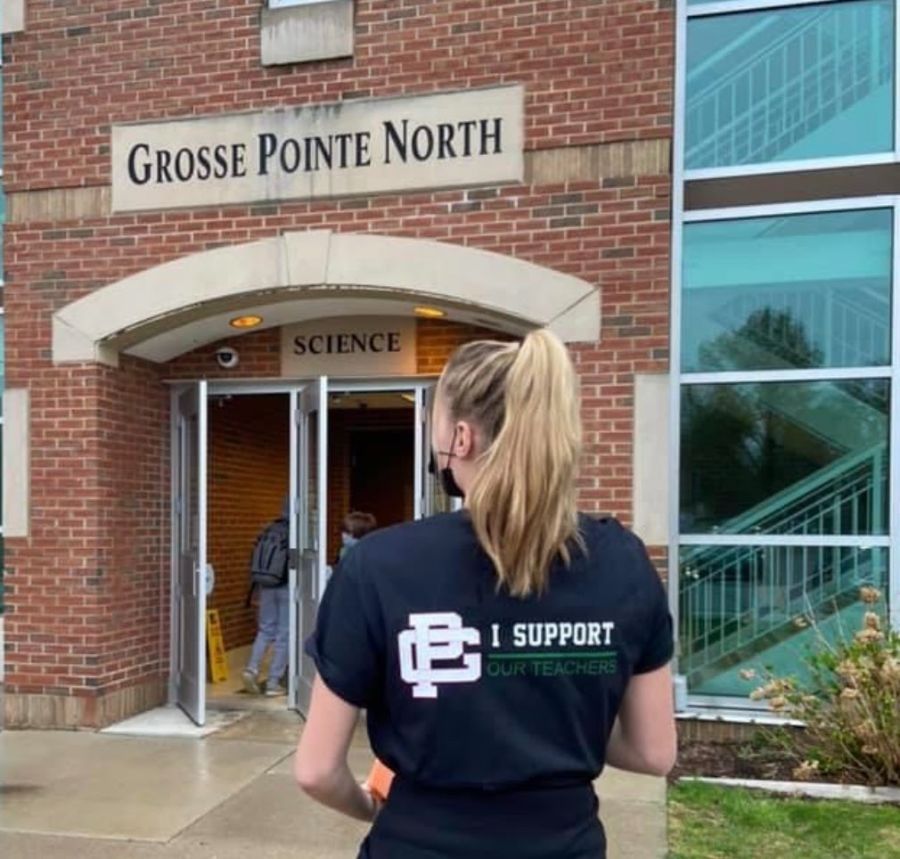 On the day following the sick out, students showed their support for their teachers by wearing black. Social studies teacher Sean McCarroll said he was happy to know that his students understood their concerns. “It was great to see students who were supportive and on board,” McCarroll said.

By Farrah Fasse and Grace Cueter

On April 26, the Board passed a resolution that aimed to improve students’ and teachers’ mental health by lowering the contract tracing radius from six feet to three feet and reducing the quarantine period for close contacts from 14 days to 10, as well as allowing those identified as close contacts to “test out” of their quarantines. By obtaining a negative test result on day five of their quarantine, they could return on day seven. Although it was passed by the board in a 6-1 vote, it was the center of much controversy in the community.

Board trustee David Brumbaugh was the sole vote against the resolution and says that his main justifications for his no vote were the lack of student and teacher involvement in the decision-making process, as well as the nonadherence to local health department guidelines regarding quarantine rules.

“I think that the board is in a difficult position because generally speaking, the counselors, the building administrators, and the students are actually kind of living and breathing that situation every day,”  Brumbaugh said. “I would rather have had them be involved with that discussion and tell us how we can help and then we can actually size our oversight role more in a way of  ‘let’s ask questions, let’s have a discussion.”

Although the loosened quarantine restrictions went against local health department guidelines, Sterling Heights family physician and GPPSS parent, Tristan Guevara, says that high schools do not pose a serious risk for transmission of COVID-19. Due to stringent protocols such as masking, frequent sanitation of surfaces, and desk shields, he says that he is “fully comfortable” with reducing the distance for contact tracing and duration of quarantines.

Guevara also said that he’s seen an increase in patients struggling with their mental health coming into his office, and believes the Board is doing the right thing.

“As a physician, I will tell you one out of three of every one of my visits is regarding depression and anxiety,” Guevara said. “I’m seeing this in a lot of our high school students and a lot of them because they’re quarantined, they’re isolated from their friends. This is a big deal.”

On April 28, in response to the lack of communication and teacher representation, more than 40 North staff members called in sick, deciding that they needed a mental health day for themselves.

Despite the common belief that the “sick out” was a North-led protest, social studies teacher Sean McCarroll says that the idea came from another school in the district, and news spread among North teachers.

McCarroll spoke during the April 26 board meeting on the lack of teacher representation and publicly announced his resignation from the school district. McCarroll also says that the teachers’ discontent was not a result of the rules themselves, but rather by the pattern of teachers not being involved in district-level decisions.

“It’s not so much the decision that was being made as much as it was how it was being made,” McCarroll said. “Our school board is not qualified to make decisions that are adverse to what the local state and federal health organizations are saying.”

McCarroll explained that he does not believe the way that school board members are elected is beneficial to the community as a whole, and elected members are not equipped to make decisions regarding health, specifically the mental health of students. He says that they are not currently taking the right approach to the issue.

The controversy surrounding the “sick out” was rooted largely in the beliefs of the students. While many students sided with the teachers and believed their actions were necessary and empowering, others said that it was the teachers’ job to come to school and educate their students, regardless of the decisions being made by higher powers. The students in support of the teachers responded the following day by wearing black.

Junior Gabe Loper was a large advocate for the teachers and has continued to spread his beliefs and take action in the past month. Loper agrees with the statement that the members of the Board do not have the qualifications to make decisions regarding mental health. He says that they have failed to fully acknowledge the issue and in order to appropriately combat the matter they need to communicate with students and teachers directly.

“You can’t represent someone and then not ask for their (input),” Loper said.

Although the large majority of North teachers participated in the “sick out,” a small number decided not to take part in the day. The teachers that chose to come in believed that the action taken was each person’s own decision. One of these individuals that did not participate was math teacher Julie Pappas. Pappas says that she feels safe in the school environment, and believes that her students do as well, even with the change of quarantine restrictions.

Pappas also said that the transition from the rule of a six-foot distance to a three-foot distance did not create much of a difference regarding the learning conditions.

“I think that when the change occurred, more students opted to stay home, and therefore some classes were still able to have the 6 foot distance between students,” Pappas said. “I don’t think classes felt crowded.”

The focus on safety, spacing, and mental health have been a constant focus in the district and on the school board with the passing of the new quarantine restrictions. However, the decision made regarding those restrictions and the way that the decision was made became a point of contention between teachers, parents, students, and board members. Brumbaugh acknowledges the teacher’s desire for a more inclusive decision-making process and believes it will lead to better outcomes and build unity rather than making individuals feel as though they are not heard.

“We have the best teachers in the state, we’ve got some great committed families, we’ve got a great community and we’ve got a lot of turnover in the board,” Brumbaugh said. “There is only one way we’re going to get through this and that is if we all do it together.”