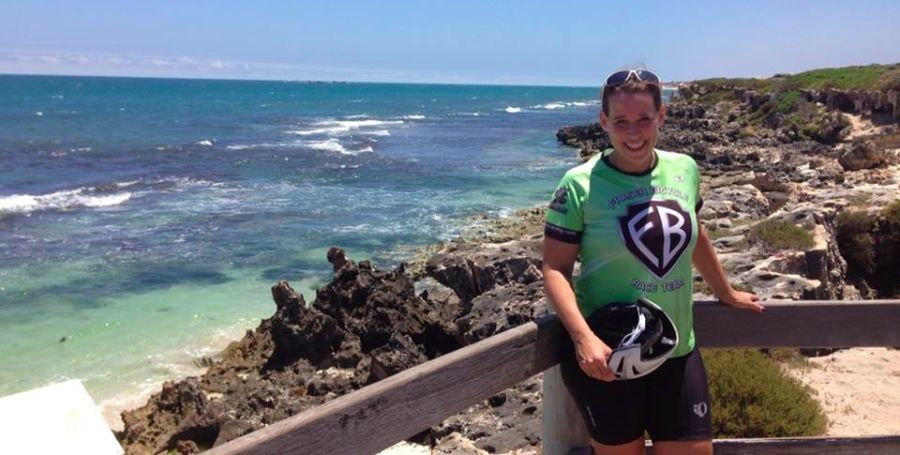 Photo courtesy of the Huffs.

For more information on the Huffs’ participation in the Ironman triathlon see North Pointe Issue 8 Page 7.

After racing across 140.6 miles of western Australia, Athletic Secretary Laura Huff and husband Dave Huff reached Ironman status. An Ironman is a triathlon composed of a 5K swim, a 112 mile bike ride and a full marathon consecutively. A participant only has 17 hours to complete the task.

“Kids were reaching out for high fives, music was playing, everyone was cheering and the announcers have this thing where they yell out over the PA, ‘Dave Huff, you are an Ironman’…it didn’t seem to matter to anyone what place you were in…they were genuinely happy and supportive of everyone who finished…that was cool.  I was tired, but you have so much adrenaline…and we were pretty well trained…that you just want to soak it all in,” Dave said via email.

The Huffs spent a week in Australia before the race to adjust to the country, but after the Ironman, the duo was able to explore more.

“We arrived, I think it was eight or nine days before the race, so we could get acclimated. We spent time—Dave’s sister had some friends there that she hooked us up with, in Perth—so for three days in Perth they showed us around, took us out to dinner and whatnot. We also did a little bit of training there, we did some running and some swimming, and then we drove down to Busselton, and we rented a house down there for a week,” Huff said. “We biked the course, not the whole course, but we basically drove the whole course, and biked portions of it a few different days. Same with the swimming. The area that we stayed at there was a beach, so we swam there a few days, and then … there were three days that you could come and swim three days of the course, so we did that.”

After the race, the pair had more free time to travel across Australia and visit different famous sites.

“My husband, he has a couple of high school friends that live in Alice Springs— that’s right in the middle of the country, right in the middle of the Outback—so we went there for a couple of days, they showed us around, we got to go to the joey rescue, hold and feed baby kangaroos. And it was just, really, really neat. We hiked in the Outback, and that was just a few days after our race, so we were sore, but we did a small hike, and they showed us around. Then they came with us to Cairns, on the eastern side of the country. We snorkeled the Great Barrier Reef and explored around that area, had a lot of fun there,” Huff said.

However, tragedy took place in Sydney the day before the Huffs arrived. A gunman held over a dozen people hostage at a downtown coffee shop.

“We were kind of monitoring that the night before because that happened the night before. We woke up in the morning, and they had pretty much had that situation resolved, somewhat, and when we got there, we found out our hotel was only one block away from it, and so that was a little sobering,” Huff said. “I don’t know what word to use, but it was a little unsettling, and the people really there have never experienced anything like that.”

Seeing the reactions of Sydney residents was a different experience for the Huffs.

“The more we talked with locals and things like that, and we watched the memorial, we walked down to the memorial, and folks were putting flowers down and stuff like that, and we watched it grow from the size of your dining room table to the size of a city block,” Huff said. “I mean it was just, the outpouring of support for those families like that, it was, my husband said something like, ‘It was their 9/11.’ They felt terrorized, you know, so we watched that, and it was interesting—that was the only thing that was, I want to say was negative about our trip. It was hard to see people in pain there, but you know, there was a huge outpour of love and support there.”

The Huffs flew home to visit their daughter in New Mexico after their time in Australia. The pair is considering signing up for another Ironman and are looking into other smaller triathlons.

“We are trying to schedule another for 2015 but might have to wait until 2016 because most of them have sold out, and we didn’t want to sign up for our second one before finishing our first, so we missed getting in on the good ones, but yes, we will be doing more,” Dave said.

The 2015 Ironman in Arizona sold out the day of on-site registration, but the two plan on doing the race in 2016.

“What happened in Arizona was the next day they sold out for the next race. The volunteers can register—they are first in line to register, that’s a good reason to volunteer, so that you can get first priority for the next year’s race. And that’s something we might do this year—we may try to volunteer for Arizona, and go there, and then sign up for 2016, Arizona,” Huff said. “So that’s possibly a goal. But I think for this year we are going to sign up for some Olympic distances, some half-Ironman distances, and some other fun races.”