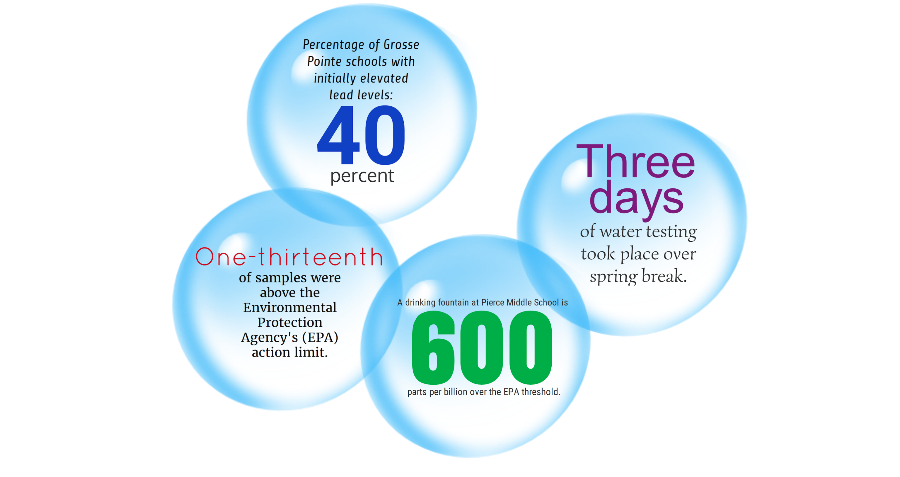 Should you worry about the water?

When sophomore Lilly Reinhard attended Brownell Middle School, the concern of elevated lead and copper levels in the school water was nonexistent. But in light of the Flint water crisis a recent study, conducted per request of the school district, revealed that Brownell is one of three Grosse Pointe schools that have lead and copper levels that exceed the maximum set by the Environmental Protection Agency (EPA).

“(When I found out) I was probably a little bit concerned because my two younger brothers go to school (at Brownell),” Reinhard said. “I was concerned about the effect it would have on them if they were drinking the water especially before they knew about it.”

Along with Brownell, Pierce Middle School and Barnes Early Childhood Center both have elevated lead and copper levels. While having too much copper is still not ideal, the main concern of the district is on the lead levels. Lead is the most dangerous when it comes to health issues—being exposed to high amounts can cause learning and cognitive disorders which become a problem for children.

The highest amounts of lead were found in Brownell and Pierce.

“High levels of lead in water will accumulate (in the body) fairly quickly which is detrimental, so the EPA has set very low levels for that. Any level of lead is really not good for you but it’s really hard to keep it out,” science teacher Chris Amore said. “It doesn’t really matter what you do. You are going to put some of this in your body because it’s out there.”

The study was conducted by Testing Engineers & Consultants Inc. The company collected 130 samples throughout the public schools in Grosse Pointe. Ten of the samples exceeded the cap on lead and copper. These 10 samples came from three schools: Brownell, Pierce and Barnes.

Although it’s possible Reinhard may have been exposed to small amounts of lead while at Brownell, she’s not too nervous.

Any level of lead is really not good for you but it’s really hard to keep it out.”

“I’m not too worried about it, it’s been a few years (since I went to school there), so I don’t think it’s been going on too long without them noticing it, hopefully.”

Lead and copper is not in the water itself, so this discovery does not mean everyone on Grosse Pointe’s water supply is at risk. Lead and copper leaches into the water from solder and piping that contain the metals. Most homes rely on copper plumbing, but the lead can originate from the solder that is used to connect the pipes, and also certain valves. It is most common in older homes that were built earlier than 1989, according to Grosse Pointe Farms water superintendent Scott Homminga.

Grosse Pointe’s water is treated carefully along its route from the Detroit River to homes to ensure that it does not contain any dangerous metals from the source.

“Our water comes from several water treatment plants in Detroit, the main source is located on Jefferson and the other comes from a booster station located on E. 8 Mile Road. The water is treated at these plants by several different ways of disinfection,”  Grosse Pointe Woods Department of Public Works assistant director James Kowalski said via email. “Chlorine (chlorination) is the most common chemical used in water preparation and disinfection of piping.”

Still, this does not prevent the lead from finding its way into the water. Many times it happens through the plumbing.

(When I found out) I was probably a little bit concerned because my two younger brothers go to school (at Brownell).”

The testing company took two types of samples from each site—immediately drawn samples and samples after the water had been flushed for two minutes. The 10 samples that exceeded lead and copper amounts came from first draw samples. After running the water for a couple of minutes, most of the levels dropped, but some still exceeded the limit.

The school board has taken quick action concerning the water. Water fountains, faucets and sinks are being replaced in affected schools and samples have been redrawn. Already, some of these samples have come back clear of dangerous amounts of metals.

The rest of the redrawn samples will return in approximately one week.

Oakland, California’s Golden State Warriors went an astounding 73-9 during this past regular season to break the National Basketball Association’s...