Peach Pit: “You and Your Friends” 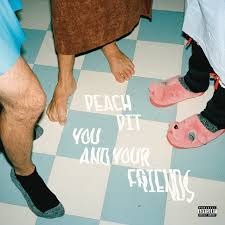 After a long three year wait, Peach Pit, a Canadian indie-pop band, released their second album “You and Your Friends” on April 3. With a mix of soft indie songs and energetic rock songs, the band describes love, loss, longing and heartache. The band stars singer Neil Smith, guitarist Christopher Vanderkooy, bassist Peter Wilton and drummer Mikey Pascuzzi. They describe their aura as “chewed bubble gum pop,” however, most say it is sad pop and surf rock.

This album consists of 12 songs, including two singles, “Black Licorice” and “Shampoo Bottles.” The opening song “Feelin’ Low” helps set the tone of the whole album; it has a chill vibe but still has that edge Peach Pit is known for. The following song, “Black Licorice,” has a flowy upbeat tone but is paired with disheartened lyrics that express what it is like to be unwanted by the people in your life.

Further into the album comes my personal favorite, “Shampoo Bottles.” Again, with an upbeat and pop tone, they describe a break up through all the meaningless items the singer’s ex has left behind. It’s hard for him to move on because he sees all of her old items around, and everything seems to point in her direction. Next comes “Thursday,” a song that turns a day of the week into an uneasy story of heartbreak.

The final title track is “You and Your Friends.” As the album comes to a close, this song brings the album to a perfect end.

Peach Pit once again lives up to great expectations. Although it has a similar sound to their first album “Being So Normal”, “You and Your Friends” is overall a great album with catchy songs. Despite the repetitive theme, I give this album 4 out of 5 stars.