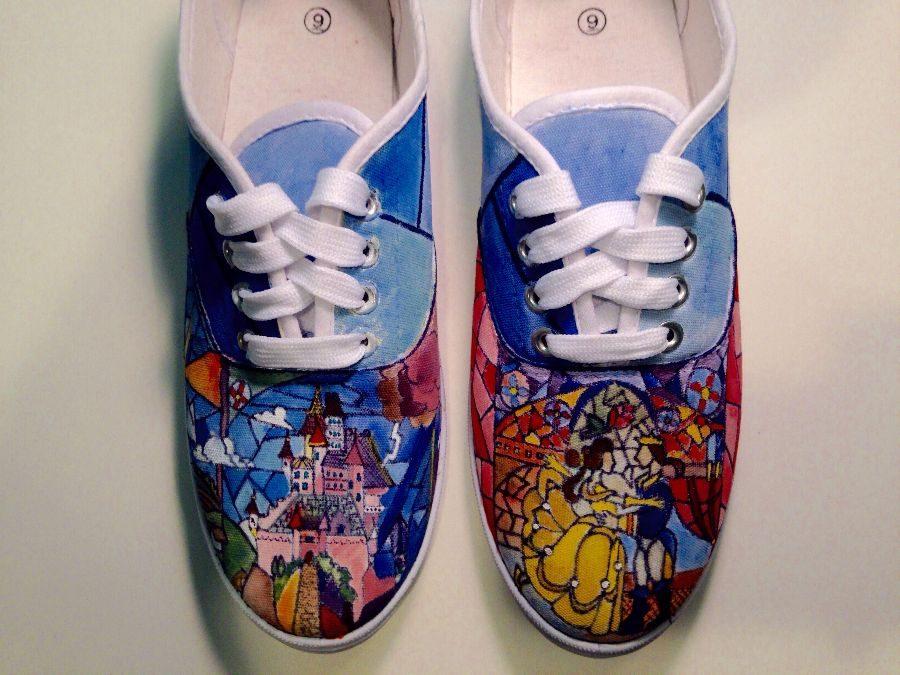 A common misconception of teens today is that they are thought to be lazy and unwilling to do things for themselves. In fact, the opposite is true. In many cases, this generation of young people are even more enterprising than their parents generation. In fact, there are many cases around the country and the world of students starting and running their own businesses.

Junior Kirstin Bessette is an example of this generation’s entrepreneurial spirit. Besset began making hand-painted shoes after a trip to Disney World.

“I saw all of these different types of shoes that people were buying that had all the different characters and stuff on them, and I just thought that I didn’t want to spend as much money as what they were selling them for,” Bessette said, “So, I figured I could make them myself, and I did. And you know my family really liked them and so did a lot of my friends. So I ended up making them for them too.”

She plans to sell her shoes through Etsy, a website that allows users to buy and sell DIY items. This way she can reach a wider range of customers. Her online store will be called Lake’s Boutique and will open soon. She believes that the best part of her product is their personal touch.

It’s just a really attractive lifestyle for our generation so I think a lot of people would appeal to that.”

“I think the customization…concept of the shoes is the best selling point…For my cousin’s wedding I put the date of the wedding  and I put their names,” Bessette said, ”She wanted a Beauty and the Beast theme so put the quote ‘tale as old as time’ and a couple other neat little details on it that were special to her.”

Bessette chose to start her own business because she believes it will continue to be a fun hobby. She also hopes that the money she makes will help pay for her education, but does not plan on building a career around it. She is one of many young adults who have sought out unconventional sources of income.

According to the Harvard Business Review, adolescents today are less likely to have the occupations that are traditionally thought of as “teen jobs” examples being working as waiters or in fast food restaurants. This is true for several reasons. One is the influence of technology. Many student entrepreneurs, including Bessette, start their businesses online. This platform makes running a business easier and allows for a broad range of people to have access to it.

Another factor is the increased competition to get into college. Colleges have begun to demand even more from students due to an increase in the yearly number of applicants. In addition to grades and test scores, students need impressive extracurriculars that make them stand out against others.

“(The hardest part is) probably spending enough time between school, homework and sports, then adding on…the responsibility of having deadlines and having to make sure the customer is happy,” she said, “It’s always my biggest fear that I’m going to give it to them and they’re not going to like it.”

Entrepreneurship can teach a student many skills that will be useful later in life. Sophomore Grant Sachs wishes to develop communication skills and financial knowledge from running his tea business, Eternitea.

“I kinda get the sense of economics and  management, you know,” Sachs said, “It’s interesting to see that I’m getting a lot of knowledge of finance. So that’s good.”

(The hardest part is) probably spending enough time between school, homework and sports, then adding on…the responsibility of having deadlines and having to make sure the customer is happy,”

Sachs started his business so that he could share his love of tea with others. He grows his own ingredients in his garden and is very interested in the medicinal benefits of herbal teas. He believes that his experience with herbs will help him one day become a horticulturist, a scientist who specializes in cultivating plants.

“I had an herb garden and I wanted to make herbal teas for myself at home. So I started out using coffee filters and I’d make my own tea bags,” Sachs said “And then I thought, well if I buy real teabags I can actually sell these to other people so I can share it with them.”

Sachs considers learning entrepreneurship at an early age important because it can help teens accomplish the goal of being their own boss. According to Forbes, 72% of young adults want to be their own boss. Millennials are captivated by this way of life because of the freedom and flexibility it offers. They are also worried about economic instability and believe that the best solution to this problem is to make their own opportunities.

“Learning entrepreneurship from here and going into college or into the real world with that knowledge ups your chance of being your own boss and having your own company,” Sachs said, “It’s just a really attractive lifestyle for our generation so I think a lot of people would appeal to that.”

Many students are discouraged from starting a business because they are worried about failure. They also believe that they are too young and inexperienced. Sachs believes that this should not deter them.

“I find a lot of people want to (start a business) but they don’t feel like they can do it…It just has a connotation with it that kids can’t have their own business. They can’t strive to reach out into the community and sell their product you know,” Sachs said, “A lot of times I was like… this won’t work because I’m too young, or all of these things are getting in the way. But if you just go for it and you really put in the effort and if it’s something you’re passionate about it it’ll work out.”

‘It’s Strange!’ but who are we to judge?

After a whopping 14 movies since its first release in 2008 with “Iron Man, the Marvel Cinematic Universe has continued...